People who lived in Joseph Smith’s day had a familiarity with the Bible that is almost unknown in society today, at least in the United States. They grew up on the Bible in their families and churches, studied it while learning to read and obtain an education, and read it or heard it quoted so often that they knew or recognized obscure passages. In those days, many people took the Bible literally and accepted the miracles contained in it without question.

Therefore it should not be surprising that when they read of God working through physical objects in the Bible, they assumed He could continue to do so. As an article on the Church’s official website explains, “Oliver Cowdery lived in a culture steeped in biblical ideas, language, and practices. . . . The Old Testament account of Moses and his brother Aaron recounted several instances of using rods to manifest God’s will (see Exodus 7:9‒12; Numbers 17:8). Many Christians in Joseph Smith and Oliver Cowdery’s day similarly believed in divining rods as instruments for revelation. Oliver was among those who believed in and used a divining rod.”

That is one reason Oliver was so excited to meet Joseph Smith and assist him. Joseph had physical objects (Urim and Thummim and other seers stones) that he used to translate. While Oliver was recording the Book of Mormon translation as it fell from the lips of the Prophet Joseph Smith, he would have resonated to verses like 2 Nephi 3:17, in which the Lord tells Joseph of Egypt, “I will raise up a Moses; and I will give power unto him in a rod.”

In section 6 of the Doctrine and Covenants, received in April 1829 as Oliver was just starting his role as scribe, the Lord declared to him: “Behold thou hast a gift, and blessed art thou because of thy gift. Remember it is sacred and cometh from above . . . if thou wilt inquire, thou shalt know mysteries which are great and marvelous; therefore thou shalt exercise thy gift, that thou mayest find out mysteries, that thou mayest bring many to the knowledge of the truth, yea, convince them of the error of their ways. Make not thy gift known unto any save it be those who are of thy faith. Trifle not with sacred things.” (Verses 10‒12.)

In these verses, the Lord recognizes Oliver’s belief that God can cause physical objects to function according to His instrumentality but also provides a caution. European and early American literature and folklore were full of stories about people who got access to physical objects that gave them great power, and the Lord would soon help Oliver see the different between faith and the magic of folk traditions. The essential difference is that many magical objects supposedly had power in themselves. The Lord, however, was about to teach Oliver that physical objects could not operate without God’s Spirit.

It was a lesson the Lord taught the prophet Elijah in the Old Testament. In 1 Kings 18, Elijah called down fire from heaven to consume a sacrifice, a miracle that deeply impressed “all the people” (verse 39). Ancient peoples often saw God in physical manifestations like lightning, thunder, and earthquakes, and you can imagine witnesses retelling the story with emphasis on Elijah’s fire god.

In other words, God taught Elijah that He was not in the wind, in the earthquake, or (very significantly given the fire miracle in chapter 18) in the fire. He could operate through all three, but the real power was in His “still small voice.”

In Doctrine and Covenants section 8, the Lord teaches Oliver this same lesson. “Yea, behold,” he tells Oliver in verse 2, “I will tell you in your mind and in your heart, by the Holy Ghost, which shall come upon you and which shall dwell in your heart. Now, behold, this is the spirit of revelation; behold, this is the spirit by which Moses brought the children of Israel through the Red Sea on dry ground.”

In other words, the Lord tells Oliver that the Holy Ghost is “the spirit of revelation”‒the very lesson he taught Elijah. The important part of the miracle through which Moses brought the children of Israel through the Red Sea, the Lord emphasized, was not his rod but the Spirit.

Then further on in section 8, the Lord specifically addresses Oliver’s gift of using a rod (or sprout as it was called in the earliest text of this revelation): “O remember these words [about the spirit of revelation] & keep my commandments remember this is thy gift now this is not all for thou hast another gift which is the gift of working with the sprout Behold it hath told you things Behold there is no other power save God that can cause this thing of Nature to work in your hands for it is the work of God & therefore whatsoever ye shall ask to tell you by that means that will he grant unto you that ye shall know remember that without faith ye can do nothing.” (Compare section 8:6‒10.)

In other words, without faith and revelation, a rod is just a stick, and a seer stone is just a rock. When such symbols benefit His children, God can operate through them. But they are not “magic.” The same could be said of objects that provide great symbolism for us today and are part of our worship and ceremonies: sacrament emblems of bread and water, consecrated oil, temple clothing, and the holy garment. 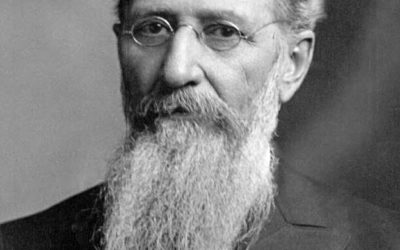